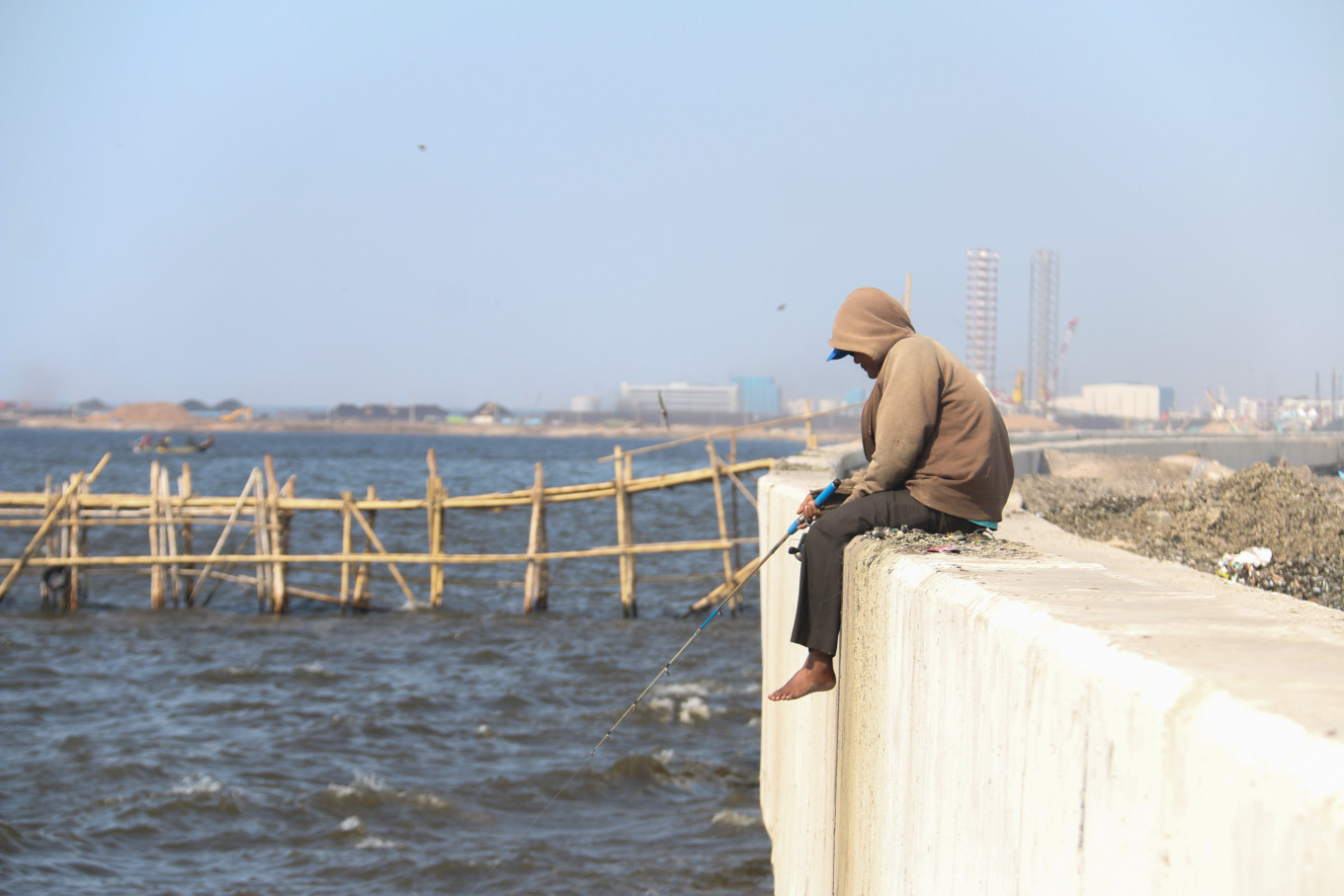 A resident sits to catch fish on a coastal embankment in Kalibaru, Cilincing in North Jakarta on Aug. 14. (JP/Rafaela Chandra Adi)

The government has found that the existing embankment on the northern coast of Jakarta, Tangerang and Bekasi is in critical condition and in urgent need of reinforcement. The project that involves 120 kilometers of embankment, however, has progressed slower than expected as the Public Works and Housing Ministry and the local administrations have built only 17 km since 2014.

The embankment project, known as the first phase of the National Capital Integrated Coastal Development (NCICD), is expected to cover all 120 km by 2024, consisting of 60 km of coastal embankment and 60 km of river embankment at the estuaries not just in Jakarta but also in Tangerang in Banten and Bekasi in West Java.

Experts have called the first phase a “no-regret measure” because it is an onshore project that has to be undertaken regardless of whether the offshore giant sea wall is built or not.

A king tide is coming

The 2016 Updated Master Plan of the NCICD laid out a plan to reinforce only 20.1 km of embankment in Jakarta. Experts agreed that the 20.1-km embankment was “critical” in flood-prone areas located below sea level or where the land subsidence rate was up to 7.5 centimeters per year, according to the 2019 Integrated Flood Safety Plan (IFSP) document available at www.ncicd.or.id. The rate of sinking is faster than the rising of the sea level due to climate change. 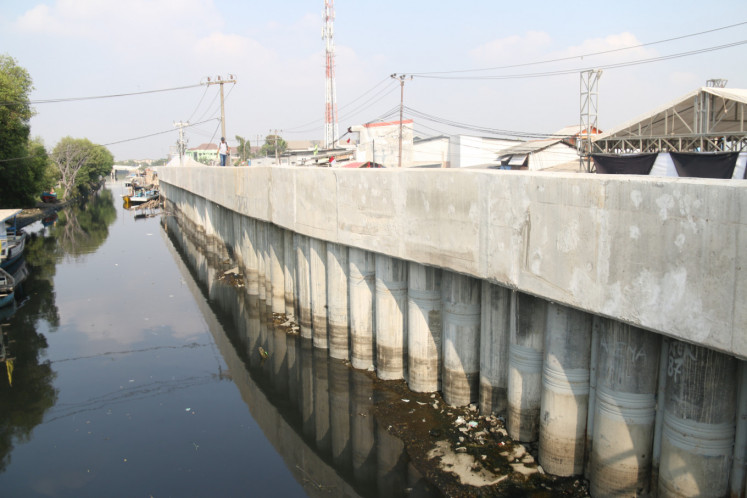 A river embankment in Dadap, Tangerang in Banten on Aug 13. The 120 km coastal embankment project includes the construction of river estuary embankments in Tangerang and Bekasi. (JP/Rafaela Chandra Adi)

However, the document also states the urgency of completing an additional 100 km of embankment owing to unusually high “king tides”, which occur on an 18.6-year cycle caused by the moon’s elliptical orbit. The last time Greater Jakarta saw a king tide was in February 2007, when the metropolis was crippled by both flooding from the sea in the north, local heavy rains and overflowing river water from the south. The next king tide is predicted to occur in 2024-2025.

“The decision to build 120 km [of embankment] has been the plan all along. The construction is to be done in stages with the first 20 km planned to be completed by 2019,” senior advisor for the NCICD’s Project Management Unit, Andi Baso, told The Jakarta Post recently. “All [120 km] must be completed by 2024.”

The fact that Jakarta is sinking has been featured in many documents and received much news coverage. The other sinking cities, such as Tangerang and Bekasi, however, are less infamous.

Kampung Dadap in Kosambi, Tangerang, which borders Kamal Muara, North Jakarta, is also sinking and the residents have to struggle with tidal flooding.

‘Racing against the sea’

Resident Arnida, who works peeling mussels, wakes up almost every morning to the sight of ankle-deep seawater inundating the road in front of her house in the dawn after high tide. 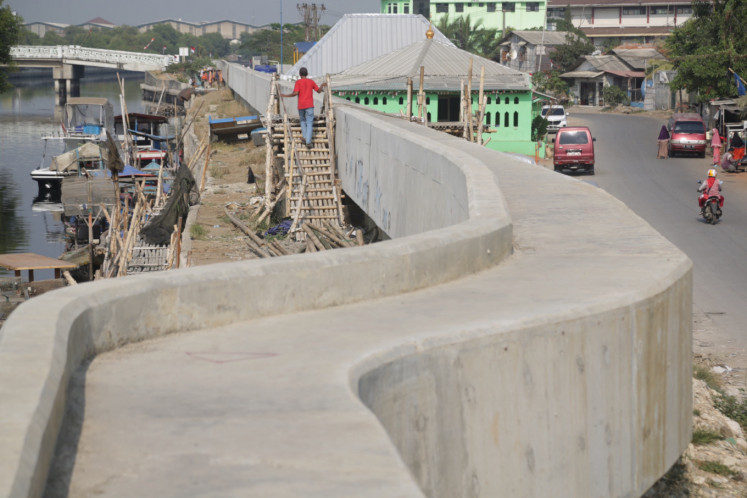 The 38-year-old woman said the seawater usually receded in the morning, but there were times the seawater got higher. At such times, her husband found it impossible to ride his motorcycle to work.

So Arnida would welcome if the government reinforced the coastal embankment in her neighborhood.

Her neighbor, Sudirman, 32, however, was wary about the plan as he believed the construction would require relocation for some residents living along the coast. “I don’t mind as long as the project does not harm the locals,” he said.

The embankment project follows warnings by experts predicting that more than a quarter of Jakarta’s 662-square-kilometer area will be submerged by seawater in less than a decade unless significant measures are taken to prevent it.

Experts have identified that overexploitation of groundwater was a leading cause of Jakarta’s sinking problem. Reports stated that more than 4,000 commercial buildings and 40 percent of the city still relied on groundwater.

The NCICD’s embankment project is a joint undertaking involving the central government — represented by the Public Works and Housing Ministry — the Jakarta administration and private entities.

The reinforcement of 20.1 km of embankment was initially expected to be completed last year, but the work reportedly fell behind schedule due to an uncertainty about funding.

Data from the NCICD secretariat shows the ministry and city administration have constructed 9.85 km of river and coastal embankment comprising 2.3 km in Muara Baru, 2.2 km in Kali Baru, 3.75 km in Luar Batang and 1.6 km in East Kali Blencong, all in North Jakarta.

The disbursement for the ongoing 7.5-km dike development in the Kamal River, Muara Karang and Pluit, all in North Jakarta, as well as in Tangerang, is underway by the ministry, city administration and private companies.

Another 27.5 km in North Kamal Muara, West Kalibaru, Muara Angke and Muara Baru (PPS Nizam Zachman) has been included in the construction plan.

With the figures, the central government seeks to review the remaining 75 km in an attempt to complete the construction on time.

Andi said all stakeholders had to sit down together to discuss the completion of the project, which requires roughly Rp 8.5 trillion to Rp 9.4 trillion in funds. He also demanded that the city administration, as the “owner” of Jakarta, initiate meetings with certain private companies that have been asked to pitch in to fund the project. Among the companies are developers involved in Jakarta Bay’s artificial islets, but there are some other companies such as PT Bogasari Flour Mill.

“A review [of authorities] is needed. After several meetings, we all might be able to map each other’s ability, to discuss the rights and responsibilities of each in a clear timeframe,” he said.

“[The decision] is to be outlined in a legal basis or formal agreement,” he added.

Gubernatorial Regulation No. 1685/2015, which became the legal basis of the project, applies for one year only, thus requires an immediate renewal.

The city administration, however, has yet to set a clear target to initiate communication with relevant private entities.

“Later, we will hold a meeting to reaffirm the completion of the embankment phase A,” Jakarta secretary Saefullah told the Post. Phase A refers to the first phase of the NCICD.

When asked about the funding, he said that for the time being, the city administration was sticking to the initial plan to involve private entities. “Not all [funding] uses the state budget or city budget. As there was request for collaboration, we encourage the private sector [to contribute to the project],” he said.

However, the city administration and the City Council have deliberated next year’s budget. In a recent kick-off meeting with the council’s Commission D overseeing development, Jakarta Water Agency head Juaini said it would continue the construction of the NCICD’s embankment under the city administration’s authority only in Luar Batang, Kali Blencong and the Kamal River.